The Story of a Pair of Shoes. And donating blood.

So, I had really good plans for today: I only have one class of Uni on Tuesdays (I know, right? Sometimes life just loves me!) and it's basically in the middle of the night. 8:00 am. Okay, okay, I am exaggerating... but I have to get up in the middle of the night to be there (05:30 am) and after that one class I don't really have anything to do because my friends are all at Uni and I am a lazy shit and don't have a real job ( I tutor kids on Wednesdays and Fridays). So I decided to do something good for society and my bank account and donate blood. Normally, I do it for free at the Red Cross but I missed the last date because occasionally I do have Uni so I went to the University clinic in Bonn where they give you 25 €.

Normally doesn't seem to work that good for me though. After going to Cologne central station after Uni and eat a way too early lunch at 10:30 to be fit for losing half a litre of blood and after going to the Uni clinic which was a trip that took me over a hour to get there, after nearly getting lost at the friggin' clinic grounds and after preparing myself to not get a panic attack when they come up with those huge needles they didn't want my blood.

Let me repead that: They. Didn't. Want. My. Blood. They didn't even test me for asiderosis ( the deficiency of iron in the blood). They asked me which asthma sprays I use, discussed for a while whether or nor not I was a suited donour and that was it.
I was a little perplex. As I already said I do have donated blood before (3 times) and my medicine had never been a problem. I was afraid that maybe the Red Cross had made a mistake those times and that my blood wasn't suitable for transfusions so I simply asked why it was a problem that I use those sprays. The lady on the counter gave me a quite annoyed look and said: "Well, we aren't the Red Cross, we give the blood to very ill patients, there mustn't be anything in there."

What do you think does the Red Cross do with the blood? Sell it to occult sects? Give it to My Chemical Romance so that they don't have to youse paint in their photo shoots anymore? Paint walls with it?
Or maaaaybe they give it to "very ill" people who have lost a lot of blood? Well, no, that idea is far of!

Don't get me wrong. I am not pissed because I couldn't donate and didn't get the money, I am pissed that I used my free time to get there and do something good and they treat me like an idiot. The counter lady was annoyed the whole bloody time! I tought my question was a valid one, I should know why my blood isn't good for transfusions, shouldn't I? Argh!

So I went back. I took the bus to Bonn central station and then remembered that there are no train connections to my home town from there, only to Cologne. Therefore, I decided to walk through the city and do some window shopping because on the other side of the city I could take a metro to the city next to mine and from there I could easily get back home.
Long things short, I suck at window shopping, I always buy stuff.

I have been looking for a decent pair of flat shoes for weeks now. I am not exactly a fan of shoes without heels, I mean where is the point in wearing them? On the other hand, I have to do quite a bit of walking on some days of Uni and I still have problems with my right metatarsal ( or rather the tiny extra knuckle that is next to it and that shouldn't be there. I am a mutant...) since January so heels are not always an option.
Unfortunatly, I haven't seen any nice shoes, neither high nor flat, during the last weeks. I don't like mainstream shoes but getting and overpriced pair of gothic brand shoes isn't really worth the money as I "only" needed flat shoes.
Luckily, I wasn't allowed to donate blood and luckily I was pissed and wanted to cheer myself up because I found the perfect pair of shoes. At H&M. Seriously. I try not to buy at those kind of chains of stores because I do not like the conditions under which they produce their products. The workers are often minors and underpaid. Urgh! On the other hand, I cannot afford to buy my basics at my favourite gothic store where I know where everything comes from, so...

Well, back to topic.
I found them.
They are perfect.
I think I am a little in love with them.
Here they are.

Aren't they just awesome?
The correct answer is yes.

I also had another lucky finding. A black agate ring with a diamond pattern. I got it at Bioux Brigitte for less than 2€ which is really cheap. Did I mention that I love semi-precious stones? Well, i do. 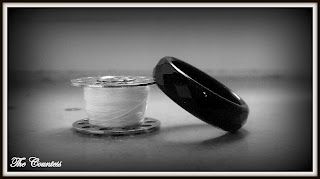 Did you have any lucky findings in the last time? Or are you more the organized and structured shoppers?

Have a great evening,