Yesterday I went to the cinema to watch The Avengers for the second time in a week. To honour this wonderful, wonderful movie I decided to create a hair style that would suit the occasion. I chose red, white and blue ribbon to match the colours of the flag of the United States. I am not a fan of America AT ALL but as Marvel comes from the States I thought the colours would fit.
If I were a super hero from the Marvel universe this is how my hair would look like when I were costume but not fighting. During fights my hair would be my weapon, it would function as rope, lasso and whip. It would be really long so I thought a bun would be good to hold it in place when not fighting. How weird is it that I even think about this kind of stuff? 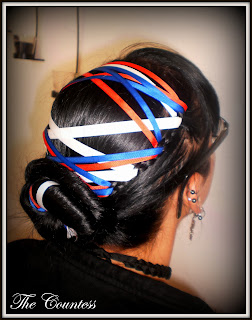 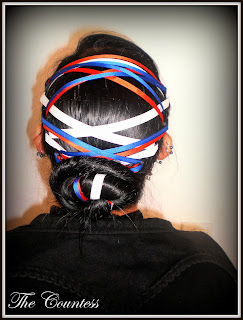 Email ThisBlogThis!Share to TwitterShare to FacebookShare to Pinterest
Labels: hair