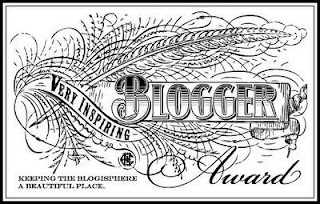 The wonderful Aristocratic Elegance nominated me for the Very Inspiring Blogger Award!
Yay! She is amazing, she posts the nicest outfits and I have never not liked a post of hers. You should definitely check her blog out!

Now, here comes the problem: What exactly do they mean by interesting? I have no clue... I'll just do my best, I'm sorry if these facts are kind of lame and boring.


Uhm, yeah, well that's my "interesting" facts.
Now I have to tag people. I have NO clue who already got nominated...

Here is one of the covers The Baseballs made, I love it! It's Candy Shop, the original is by 50 Cent.

Have a great day,
The Countess
Posted by The Countess at 14:50 5 comments:

Email ThisBlogThis!Share to TwitterShare to FacebookShare to Pinterest
Labels: award

Thoughts On Our Generation. A Poem. Sort of.

I gave up writing poems a long time ago but after reading a lot about Ginsberg and the Beat Generation I thought I could at least write down all the little pieces that come to my mind at random points.
I don't consider this real poetry, it is really just unarticulated thoughts but this is my blog and I'll post it anyway. Here we go. Enjoy.

A generation of artists and free spirits
Fingers stained with oil and ink and paint
Heads leaking and bursting,
Creativity dripping out when all we really need is logic, arthmetic and oh, so many grammar rules
A generation without Einsteins and Kants but with a fuckload of Ginsbergs and Morans and Palmers
What we have in vision we lack in discipline
I wouldn't want it any other way


Have a great day!
The Countess 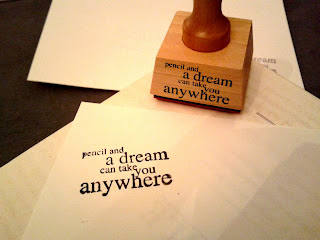 Posted by The Countess at 00:30 No comments:

What it is- A poem


I thought I'd share one of my favourite poems with you today. It is called "Was es ist" (What it is) and it was written by the German poet Erich Friede.


Have a great day!
The Countess

Posted by The Countess at 14:42 No comments:

Email ThisBlogThis!Share to TwitterShare to FacebookShare to Pinterest
Labels: poem

Keep Calm and Watch The Hobbit

I have been excited for The Hobbit movie for the whole of 2012. I loved The Lords of the Rings trilogy, I have seen it more often than I can count and as my dad is what is probably the biggest LotR fan ever, we have the very extra special editions of all three movies. These editions each consist of four DVDs, two contain the movie itself and then there are many many great information on Tolkien, the LotR world, the making of the movies, the costumes, the characters, the philosophy behind some elements et cetera (I could go on for ages) on the other two DVDs. Whenever I watch LotR I admire the elves hair jealously, have the music stuck in my ear for weeks, start sewing/making something that reminds me of the costumes and consider learning elvish. Therefore I simply HAD to watch The Hobbit.

Things I liked about the movie:

Have you seen the movie? Did you like it?
Have a great day,
The Countess
Posted by The Countess at 11:29 7 comments:

Hello everyone, it has been a while. I have no excuse. I haven't even been busy, I just did not get around to do a blog post.

What will be going on in my life in the next weeks?

University started again this week but it is the last month of the semester so from Febuary on I will have two months without any classes. I do have to write two 20 pages long essays in that time which is something I am not exactly looking forward to but yay, 60 days without classes!

Also, Karneval is almost there and I still don't have a costume. I want to go as a unicorn and I have already chosen some inspirational pictures from the mighty internet but I haven't bought any fabric and other supplies yet. I am really excited to look through all those amazing shiny, glittery, pastel-coloured fabric choices that are available in the sewing shops during Karneval!

What has been going on in my life the last days?

I made another new year's resolution: Read one book a week.
I have realised that I didn't read many books over 2012, mainly because I read many many news articles, short stories and fanfictions on the internet. I don't want to stop reading those, I just want to make sure I read some books, too!

I finally managed to take some photos of the Christmas presents some of my lovely friends gave me.

Anna gave me this really fun air refresher. It is called Anti Monster Spray and you are supposed  to spray it "under the bed and in any dark corners". It smells like lavender and fresh laundry and is simply amaaaaazing! I am afraid of the dark and I love lavender so this is a gift that really fits me. 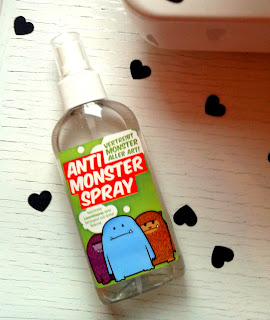 Mariazell had this wonderful unicorn brooch custom made for me by a friend of hers. Isn't hat the cutest thing ever? She also gave me a really cool tulle ring which is really hard to photograph which is the reason why I cannot show it to you. 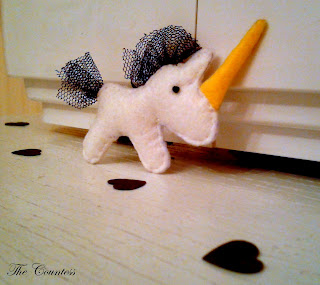 Rici made this really cool bracelet for me. My other girlfriends got the same in different colours so they are basically friendship bracelets, yay! 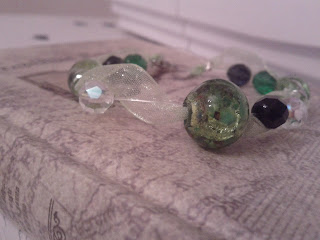 The weekend before Christmas, the Count, some friends and I went to Aachen to visit some very dear friends who study there. We went to the famous Aachen Christmas market where I wanted to buy this gorgeous silver ring. The stone is a black agate, my favourite stone of all time so I HAD to get it. Unfortunately, I didn't have wnough cash on me so the Count was nice enough to lend me some. Afterwards he refused to let me pay him back two days later he and gave the ring to me as an early Christmas present. We agreed not to give each other presents! Agh! I mean, I loved the idea but I had to get him a present the day before Christmas! Which was a Sunday, by the way... In the end, I made him a gift card to see a 3-D movie with me and as intended he used it to see The Hobbit (which was AWESOME!!!). 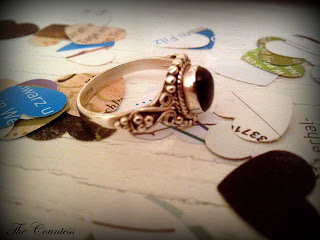 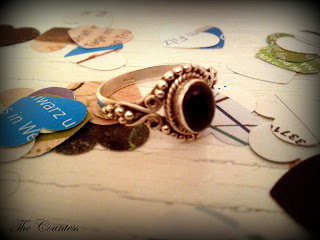 A few days ago, i decided to give myself a little present. I have wanted to get this necklace for weeks now but it is real silver and the bird is coated with real gold so it cost 20€ which is more than I normally spend on things such as jewellery because I am a poor Uni student who still lives at home.
I did buy it afterall because it is pure perfection! It suits me, my values, my view of the world and of course, my style. 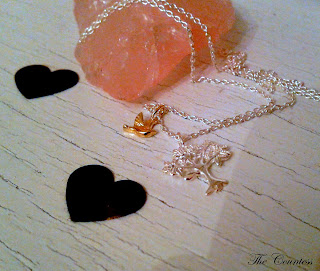 Did you get any extra special presents?
Have a great day,
The Countess
Posted by The Countess at 15:01 6 comments:

I love fairytales. They remind me of my childhood, of long gone times, of what-ifs and of the sheer believe that everything will end well in some weird and twisted sort of way. I can get lost in stories about witches, dwarfs and magic, even though I am almost 22 years old now. The origins of fairytales fascinate me, too, I love to learn about how they have changed over time.

When I heard the local storybook museum had an art exhibition on the Grimm Brothers my little Countess of Fairytales heart jumped a bit. Now, my dear friend Vivi and I finally had the time to go visit the museum and believe me, we had the best of times! The exhibition featured only pictures, almost no texts with information were given as th museum wants to make sure it directs its exhibitions at all ages but the shown art was amazing and inspiring!
I do not think that I have ever seen so many different versions of princesses and bad wolfs (Doctor Who reference ftw!) and they had books with the most common and the most strange fairytales lying around for everyone to read them. On the second floor the museum has a huge room full of children's books from fairytales to Pippi Longstockings and the Very Hungry Caterpillar.

I didn't take any photos of the books and pictures because I wasn't sure if that was allowed but here is evidence of what happens to you when you read fairytales for too long: 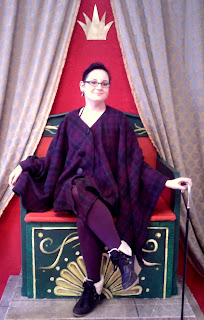 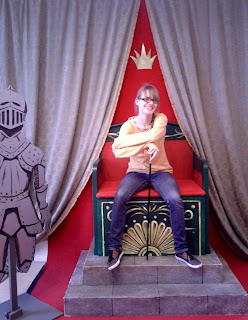 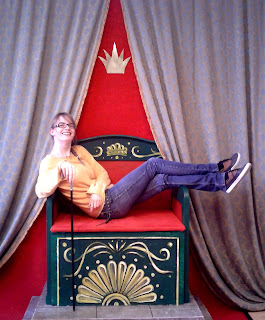 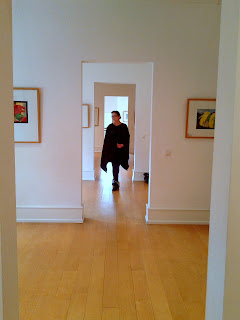 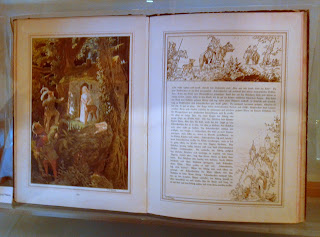 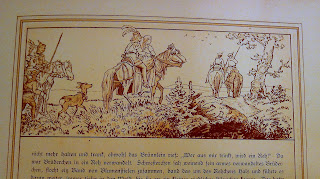 Do you like fairtales? Which is your personal favourite?

Have a great day,
The Countess

The wonderful Amey at Vegan Eats and Treats hosted a giveaway a while ago and I won one of her amazing cookbooklettes. Today it arrived and oh my, look at this great thing: 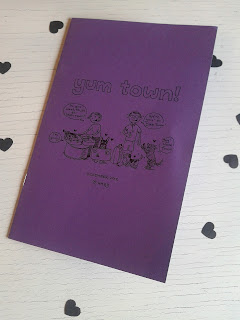 It's called Yum Town and has 14 different vegan recipes in it, catergorized under soups, entrees and cookies. Everythings sounds delicious and I cannot wait to try them all out. I am going to start with the Tofu Dijon tomorrow, I love mustard!

It is written in the loveliest handwriting and decorated with amazing little figures that she draws. I mean, look at this, it is probably the coolest cookbook(lette) I have ever owned! 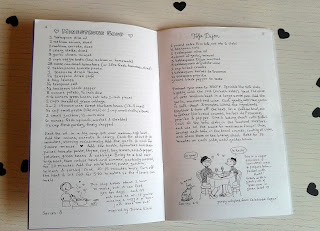 Amey even added a little calender with some of her drawings, my friend Vivi who is an artist herself has already admired it. 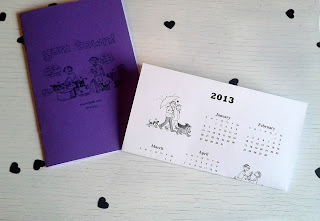 Thank you sooo much, dear Amey!!

Have a great day,
The Countess
Posted by The Countess at 12:16 1 comment:

Have a very vry happy new year, I wish all of you the best!
Do you have any new year's resolutions?

Have a great day and year,
The Countess
Posted by The Countess at 01:00 No comments: