I love modern communication systems. I'm online constantly, I have a smart phone with an internet flat, I use Facebook, Twitter, Googlemail and WhatsApp and if Myspac would still be a thing I'd re-activate my account asap because I simply loved it. Our society's way of communicating is fast, it's honest, it's uncensored and it is global. The Arabic Revolution started as a Facebook group, the victims of the tsunami catastrophe in Japan found lost family members over Twitter and one can talk to friends on the other end of the world via Skype. Even though the power the internet has over us is kind of scary it is also pretty awesome. I have made a really good friend over a German social website for pupils a few years ago and I would have never gotten to know her without that wonderful magical thing that is the internet. We're in constant contact on a  nearly daily basis through Facebook, whenever I see something that she could like I just send her a photo, it's amazing!
Still, we also use a very old-fashioned way of communication: Letters.

The art of letter writing is dying out, the only post we receive are bills and the stuff we order over Amazon and I hate that! I don't only want to take up a pen in order to do university stuff because a hand-written letter can be so much more personal than an email. A handwriting can tell one so much about a person, it's fascinating and to open a hand-written letter is one of the most amazing things ever!

When my friend and I first started writing letters a year ago I wanted to be able to make them very special and personal so I bought paper, glitter gel pencils ink, quills, sealing wax and seals over this year. 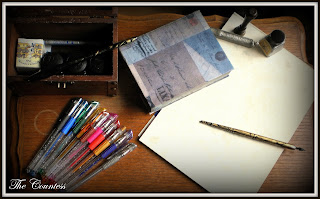 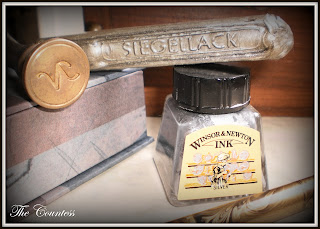 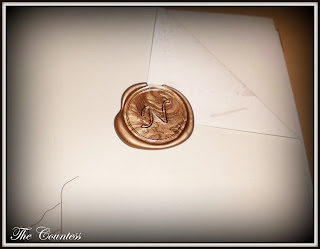 Up to now I have collected four inks (black, green, silver and violet), two quills, four sealing waxes (silver, gold, blue and read and a silver hard sealing wax (in German this kind is called Siegellack which would be translated with sealing laquer) aswell as various papers in different colours. I love to sit down and write all my stupid ramblings and fangirl ideas down in this unusual and kind of victorian way, it makes me nostalgic and even if I haven't got much to write down it is still worth the effort for the simple sake of writing.

Do you write letters? Or do you prefer emails?
Have a great day!