On Thurday I went to see Schandmaul (malicious tongue), a German medieval folk rock band with my boyfriend. I gave him the tickets about eight months ago for his birthday and the concert was supposed to take place in Feburary but unfortunately it was rescheduled due to an illness the singer had. So of course, when we finally got to see them I was really excited. Excited for me means that I want to wear an appropriate outfit to honour the occasion. As I am not really in medieval wear I decided to wear something Victorian inspired instead.

I had to make sure that my outfit was still comfortable as I wanted to dance and jump. I saw many girls with corsets, ankle long skirts and platform shoes during the concert and even though they looked really nice I pitied them. A concert should be attended to enjoy the music, to dance and to sing, not to look pretty and to show off.

Here is what I decided to wear: 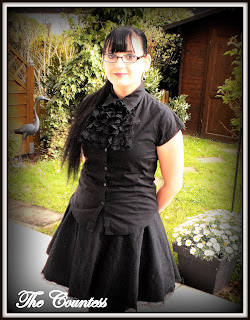 Have a great weekend,