“A journey is best measured in friends, rather than miles.”

It's been a while, I know.
I do have an excuse though (other than pure laziness): I went to Hamburg. Yay.

I might have mentioned before that I have a pen pal who has become a dear friend of mine: Sonja. We met over the internet nearly 3 1/2 years ago and started emailing for a reason that neither of us knows anymore. We soon noticed that we share a love for good written stories, movies and music. Ok, well, she showed me most of the bands that we now both like such as Fall Out Boy, Cobra Starship and many more. I on the other hand finally found somebody who at least knew My Chemical Romance and who did not think that they're a weird emo band. Which they are not, by the way.

We never stopped emailing and sometimes we even exchanged up to five emails a day. Proper emails, not facebook messages. So when I last year found out that her birthday was coming up I awkwardly asked her for her address so I could send her a little present. I nearly assumed that she would find some sort of excuse because, lets face it: We never actually met. Or spoke on the phone. Just emails. Luckily, she DID give me her address and since then we have been exchanging letters. And postcards whenever one of us is on a holiday.

In December 2011 we finally got the opportunity to meet when You Me At Six played a show in Cologne. She came over and we spent two great days watching X-Men (we're Marvel fangirls...seriously.), Youtube videos, baking vegan cupcakes, giving them to You Me At Six, fangirling about the tweet by the band that followed those cupcakes (with a picture!) aaand watching some more Youtube videos. It was amazing.

Now, half a year later we met again. I went to Hamburg (by car ...stupid idea...) last Friday and again, it was just great seeing her. One would think it is a little weird to see that person that you normally only know because of their handwriting but after about an hour I already forgot about that. Sonja is amazing and so is her family and even her cat.

After a 8 1/2 half hour horror trip over the German highways (Autobahnen) I arrived Friday evening. After dinner with her family we did something that we thought would be appropriate for Marvel fangirls: We went to the cinema to watch The Avengers. I hadn't seen it before in contrast to Sonja who saw it for the fourth time that night. First I thought she was just obsessed but now I can really understand her, the movie is soooooo unbelievably good!!! Seriously, I went to see it again just yesterday!

On Saturday we decided to visit a fleamarked where Sonja drew some stuff and people for one of her art classes. Later, we had lunch in a vegetarian café and went to the harbour. There we decided to take a little boat tour because I felt that I should do something tourist-sy just because I could. The weather was sooo nice and Sonja even burnt her neck during that tour. 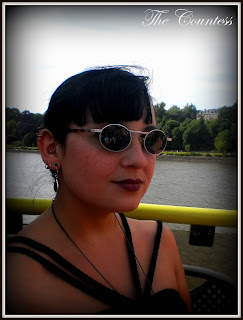 Afterwards we went to heaven aka the biggest Saturn store in Europe. Saturn sells everything concerning electric and technics and they had a whole floor only for DVDs, Blue-Rays and CDs and a cinema. Yep, a cinema. Also they had this:
Huuuuuuuge action figures! We wanted to take them all home!

I bought a whole bunch of stuff. I got the second season of BBC Sherlock (so did Sonja), Scott Pilgrim vs. The World and Thor on DVD. I was beyond happiness.

What else did we do? Oh yeah, Sonja showed me the town hall on the way to the Saturn and the building is unbelievably beautiful! We didn't have the chance to actually go in there due to our tight schedule that included an hour at Saturn. 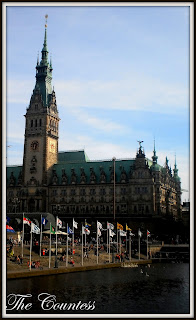 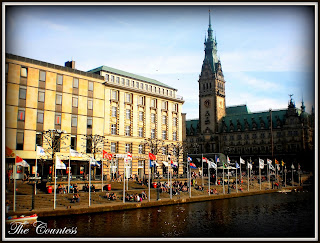 We spent the evening watching the Eurovision Song Contest while live-blogging about it on Tumblr. My favourite quote from there concerning the ESC: "The day when America realizes they are not the only country in the world." It was quite funny to read all those comments of confused Americans who didn't understand why Tumblr was suddenly full of this weird thing called Europe.

Afterwards we originally wanted to go out dancing because I have never done that before (which Sonja finds hard to believe) but when the ESC was over it was 1 am and it rained.... So we rather stayed at home and watched Thor.

Sunday went according to plan. That plan included Youtube videos, Sherlock A Game of Shadows, Scott Pilgrim, BBC Sherlock with live-blogging, Doctor Who, some more Youtube videos and the specials on Sonja's X-Men First Class Blue-Ray. Yes, we stayed the whole day at home and yes, it was awesome!

On Monday I unfortunately had to go back home. That weekend was simply amazing and I hope we will meet again soon. There are some undefined plans including the Frankfurt Book Fair.

Again, I'm sorry for the lack of posts, I have a few more to come the next days to make up for it.

Have a great day,